When they part, Takumi closes his eyes, and Gii tells him to stop looking so inviting. They kiss again, and Gii leans Takumi back on the couch.

Oh look! A gif. Gii pushes him back down on the couch and heads for the door. Door locked. Lights off. Takumi bewildered. Gii leans on the edge of the wall, back in view, and asks Takumi which he prefers, the couch or the bed.

Takumi says, "Either Lots of gasping and kissing. At one point, they flip so Takumi is sitting on top of Gii, but Gii maneuvers himself back on top.

The climax of all this activity of course comes in slow motion, but I don't think it was as awkward as in Bibou no Detail.

I loved the sweet, lingering, post-coital kisses they share. Outside, rain is falling. Takumi and Gii are lying cuddled together in bed, and I was quite satisfied with how comfortable the two of them are with touching each other.

There were lots of sweet moments - Gii's hand on Takumi's waist, Takumi touching Gii's chest and shoulder - it all spoke of much more physical comfort than we've seen in the past, which really made the scene sweet for me.

Takumi wakes up and wonders when he fell asleep. Gii asks what time it is, and Takumi, realizing how late it is, says he should get back to his room.

Gii pulls him close and asks Takumi to be his for tonight. Takumi agrees happily, but then remembers why he wanted to talk to Gii in the first place.

Gii asks if it's about the phone call from his mom on Sunday, and then asks if he could go with Takumi to visit his brother's grave since he remembers the anniversary from last year.

Gii claims he doesn't know the correct or Japanese way of asking, so when Takumi sits up, he thinks that he overstepped his bounds and was wrong to ask.

They both have adorably ruffled hair. Takumi says that that was exactly what he wanted to ask Gii, if he'd come with him to visit his brother's grave.

He said that he wanted to ask him this whole time, but when he's alone with Gii he can't think. Gii asks Takumi formally, "Can I go with you to visit your brother's grave?

Gii says he wants to leave school together with Takumi instead of meeting at the train station. He wants to do this properly because he feels like he's only been making Takumi cry all year yes, you have, Gii , and that Takumi's brother would get angry with him if he doesn't start treating Takumi better.

Takumi says that Naoto won't be mad, and they share another tender moment holding hands. Tuesday, June Takumi writes his application to leave school in the Student Affairs Office remember from Niji Iro no Glass that students need special permission to leave school.

There's a brief moment where Gii and Akaike talk about the upcoming plans for Tanabata July 7, which is the focus date for Pure , and then an underclassman asks Gii for help with English.

Thursday, June Takumi and Akaike are sitting under a roof while rain pours down behind them, drinking can coffee and talking note: since they filmed in February, they had to simulate all the rain, and apparently Mao and Takki got soaked doing this scene!

He tells Takumi not to let any teachers know about the totocalcio though! Then Akaike mentions offhandedly that Gii is participating in the tournament, so Takumi should support him.

Takumi is shocked, remembering that once nominated, you can't drop out of the tournament and since Gii is the type of person who doesn't let people down, he probably wouldn't just drop out anyway.

Takumi says, "Gii, you promised Akaike is surprised and concerned.

Takumi says that he's changed a lot! Gii, still upset, says they shouldn't be fighting late at night, and tells Takumi to go to sleep.

Gii's flashback ends. In the present, Takumi returns to room , where Misu is studying. Misu tells Takumi not to get too close to Shingyouji, revealing how jealous he is of their friendship.

Takumi tells Misu he shouldn't have worried Shingyouji about RinRin, and asks why Misu is jealous when he and Shingyouji aren't lovers.

He then muses aloud that Shingyouji probably doesn't have anyone but himself to talk to about his adoration for Misu. Misu mentions that Shingyouji is his possession a line echoed in Pure.

Misu decides to take a walk perhaps to Shingyouji's room?? Takumi looks at the letter from his mother, and the train ticket she included in case he wants to go to his brother's grave.

He says, "Well, I guess it's okay," and walks up the stairs to Gii's room. Some freshmen are discussing their tests, and Takumi stands outside of room , too nervous to knock.

He mentally berates himself for coming that far and then not being able to knock. He wonders if he should just go back to his room.

Fortunately, a helpful freshman says that Gii's in his room, he saw him go in there a little while ago! Takumi thanks him, then turns to go, but Helpful Freshman just won't stop being helpful!

He knocks on the door and tells Saki-senpai that there's someone to see him! Helpful Freshman leaves, happy in the knowledge that he did a good deed!

Gii tells Takumi not to let the freshmen hit on him, and then pushes Takumi into his room. Minoiwa is in Gii's room, sitting at his couch.

He says hello and then suddenly remembers something totally urgent that he simply must attend to right away. Minoiwa, you know how to read a room.

XD After he leaves, Gii tells Takumi to sit on the couch and asks if he wants coffee. Before filling the cup, Gii takes off his glasses.

He sits next to Takumi on the couch and strokes Takumi's cheek with the back of his hand. Takumi asks if it's really okay for him to be here alone with Gii.

Gii says that he was alone with Minoiwa a few moments ago, so it won't seem suspicious - the only suspicious thing will be Gii having so many different visitors like he's a playboy.

Gii mentions that he regretted the kiss in the greenhouse, and then immediately tells Takumi not to misinterpret. What he means is that he has very little self-restraint, so when they kissed in the greenhouse, he was pretty much ready to make love to Takumi right then and there.

Takumi asks if Gii isn't mad, then, that he just showed up right now. Gii says of course not, and they kiss. When they part, Takumi closes his eyes, and Gii tells him to stop looking so inviting.

They kiss again, and Gii leans Takumi back on the couch. Oh look! A gif. Gii pushes him back down on the couch and heads for the door. Door locked. Lights off.

Takumi bewildered. Gii leans on the edge of the wall, back in view, and asks Takumi which he prefers, the couch or the bed. Takumi says, "Either Watanabe Daisuke Saki Giichi.

There have been no reviews submitted. 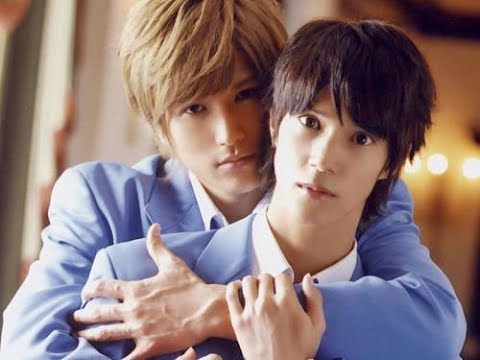